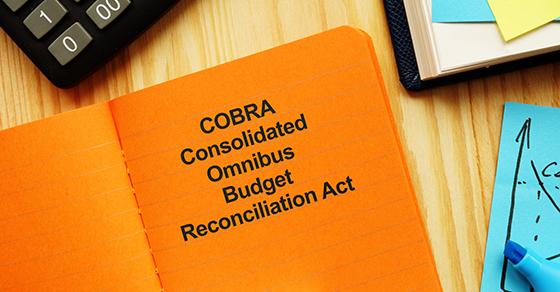 Under the ARPA, a 100% COBRA premium subsidy and additional COBRA enrollment rights are available to certain assistance eligible individuals (AEIs) during the period beginning on April 1, 2021, and ending on September 30, 2021 (the Subsidy Period).

If your business is required to offer COBRA coverage, it’s important to mind the details of the subsidies and a related tax credit. Here are some highlights of the additional guidance:

This is true even if the AEI didn’t notify the plan of the intent to elect extended COBRA coverage before the start of the Subsidy Period — for example, because of the Outbreak Period deadline extensions.

End of Subsidy Period. The subsidy ends when an AEI becomes eligible for coverage under any other disqualifying group health plan coverage or Medicare — even if the other coverage doesn’t include the same benefits provided by the previously elected COBRA coverage.

For example, though Medicare generally doesn’t provide vision or dental coverage, the subsidy for an AEI’s dental-only or vision-only COBRA coverage ends if the AEI becomes eligible for Medicare.

Claiming the credit. Under most circumstances, an AEI’s current or former common-law employer (depending on whether the AEI had a reduction of hours or an involuntary termination) is the entity that’s eligible to claim the tax credit for providing the subsidy. If a plan (other than a multiemployer plan) covers employees of two or more controlled group members, each common-law employer in the group is entitled to claim the credit with respect to its current or former employees.

Guidance on claiming the credit is also provided for Multiple Employer Welfare Arrangements, state employers, entities undergoing business reorganizations, plans that are subject to both federal COBRA and state mini-COBRA, and plans offered through a Small Business Health Options Program.

The ARPA’s COBRA provisions have been in effect for a while now, so your company likely already has procedures in place to provide the subsidy to AEIs and claim the corresponding tax credit. Nevertheless, this guidance offers helpful clarifications. Contact our firm for more information.